A very very dry summer has come and gone. Finally, everything lifted. Our expectations, our optimism, and our joy broke out in abundance at the great downpours we experienced recently.

Once again it is time to plant. This time, we have our very own rooibos seedlings amongst the ones grown for us by our regular suppliers. 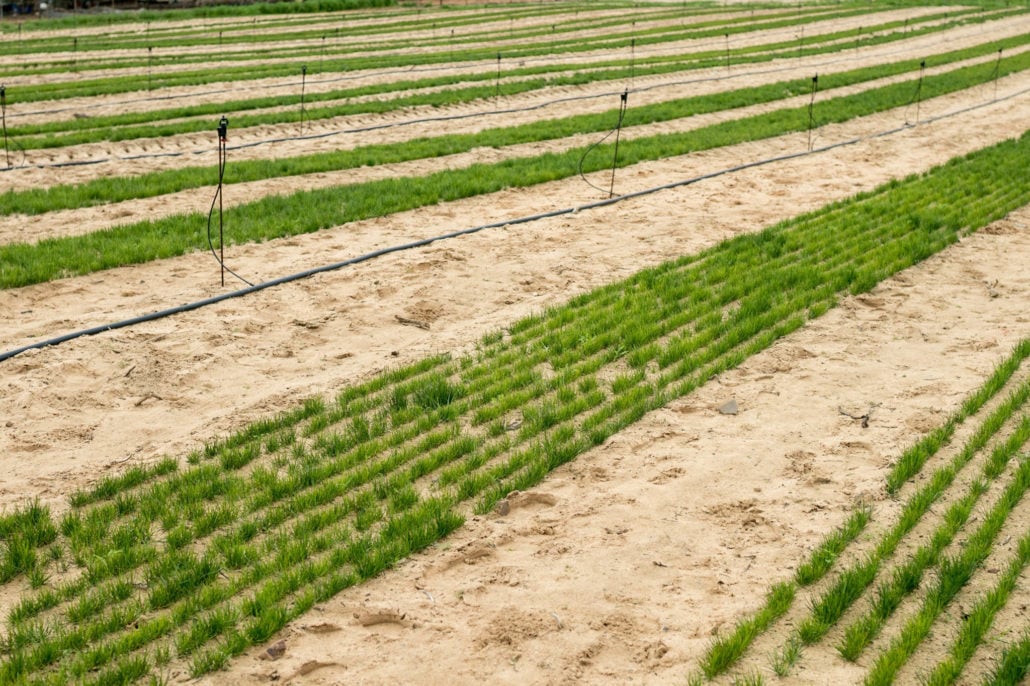 Our daily walks or drives somehow kept finding their way past the new tea nursery. We have been watching and willing them to grow before they were even just faint green specs on a large open field.

An exciting bit of expansion for us! Plus almost doubling up on our planting this year. That will take some manpower and long hours but the team is ready. We look forward to a great planting season and a generous rainy season that will break the back of the drought in the Western Cape 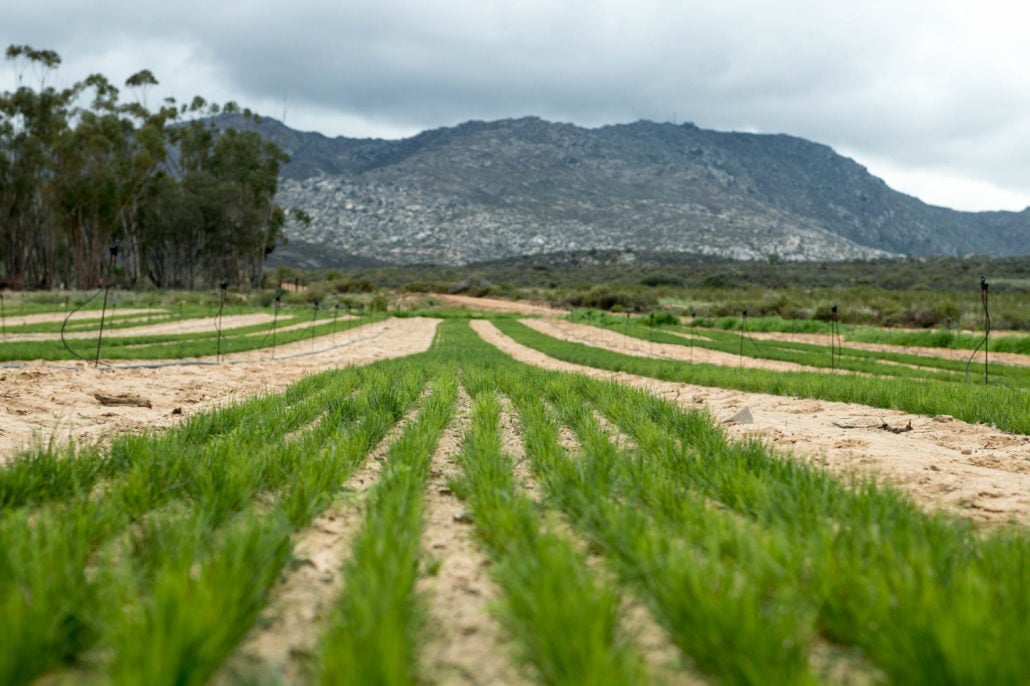 Where did the drought leave us?

We experienced a 30% reduction in anticipated volumes on our harvest this year. The lack of good rain has also left its mark on our more mature plants. Some did not make it. Others started yellowing due to lack of water which made it more of a target for pests. As you know, the rooibos plant has a deep tap root system but short bursts of rain with shallow moisture penetration has benefitted the younger plants ( with shallow roots at this stage) but left our older plants dry. So the drought took its toll but, there is always a way out. And a new season.

Rooibos tea seems to love extremes when it comes to planting and harvesting. It gets planted in the cold of winter and harvested in the heat of summer. The Western Cape, home to Rooibos, have had some really chilly days but it is so worth venturing out into the cold to watch the tea planting process. Sit back and enjoy watching this big event with us!

Of course, it starts with rain and just the right soil conditions. The Western Cape has been hard hit by drought so planting this year is very challenging and we are grateful for every drop of rain. Rooibos requires well drenched sandy soil but not so sandy that the water disappears too quickly. Depending on the type of soil, there are two options available to our farmers, direct seed sowing or planting seedlings. 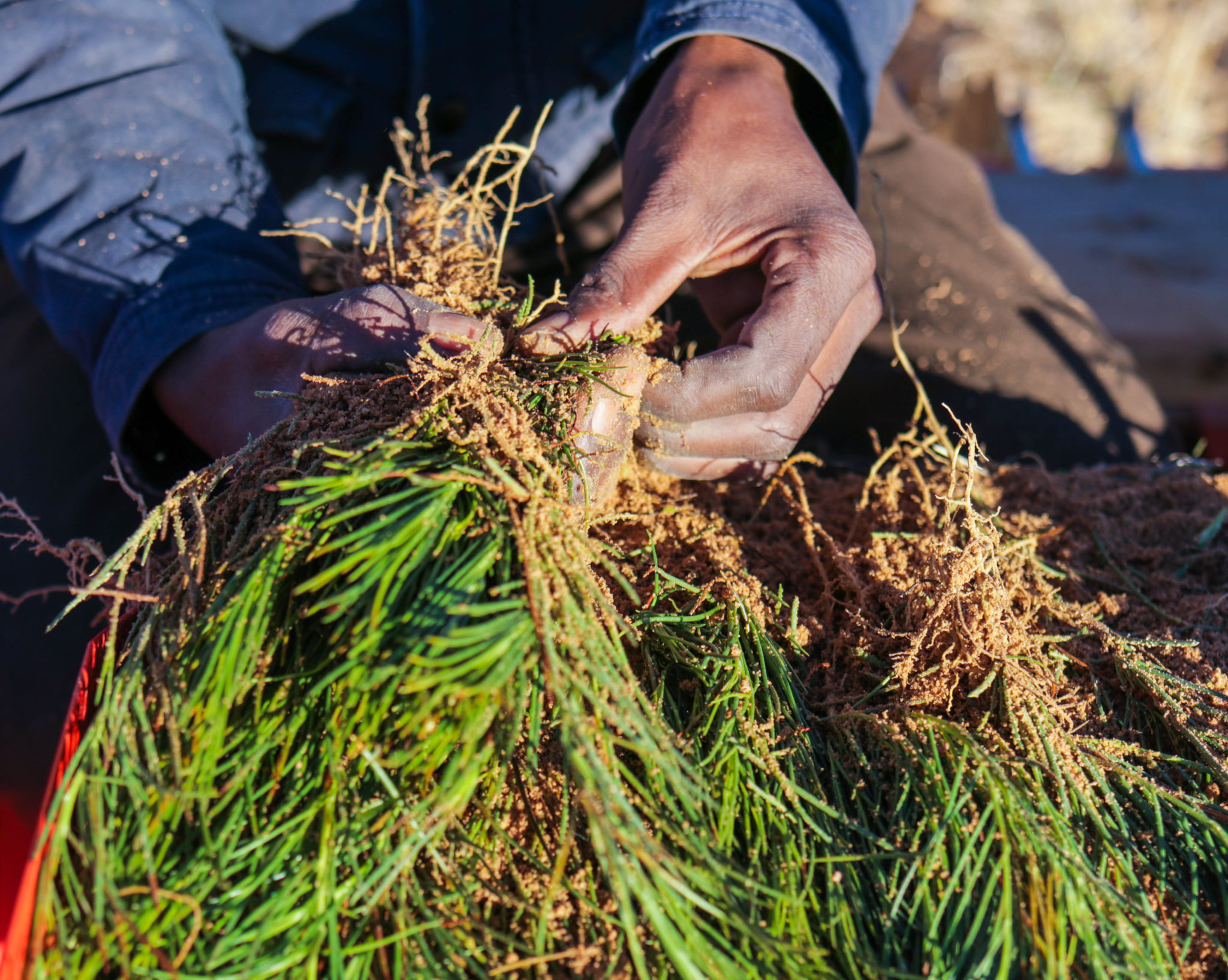 We use the latter but gathering the seed is an interesting process. The Rooibos plant bears little yellow flowers which eventually burst into seed. These are collected by literally scraping together the top thin layer of soil around the plant. This ‘seed soil ‘ goes through a first sifting to get rid of most of the coarse sand. Then it gets sifted again but this time underwater so that the Rooibos seeds can float to the top and from there the seed, which has a hard outer scale, is put through a rubbing process to aid germination. The seed is returned to the nurseries where our seedlings are grown between Feb and early June.

Soil preparation, if it is a new field, starts just after the harvesting process which runs from Jan to April. At Carmién Tea we believe in conservation farming and minimum handling of the soil so no plowing takes place in establishing a new field. No animals are allowed on the fields at any stage. Wheat, also called the soil doctor, prepares the field for the seedlings and is sown in this field the first year. The first seedlings are only planted during the second year of a new field’s existence. The wheat stubble is also left as protection. 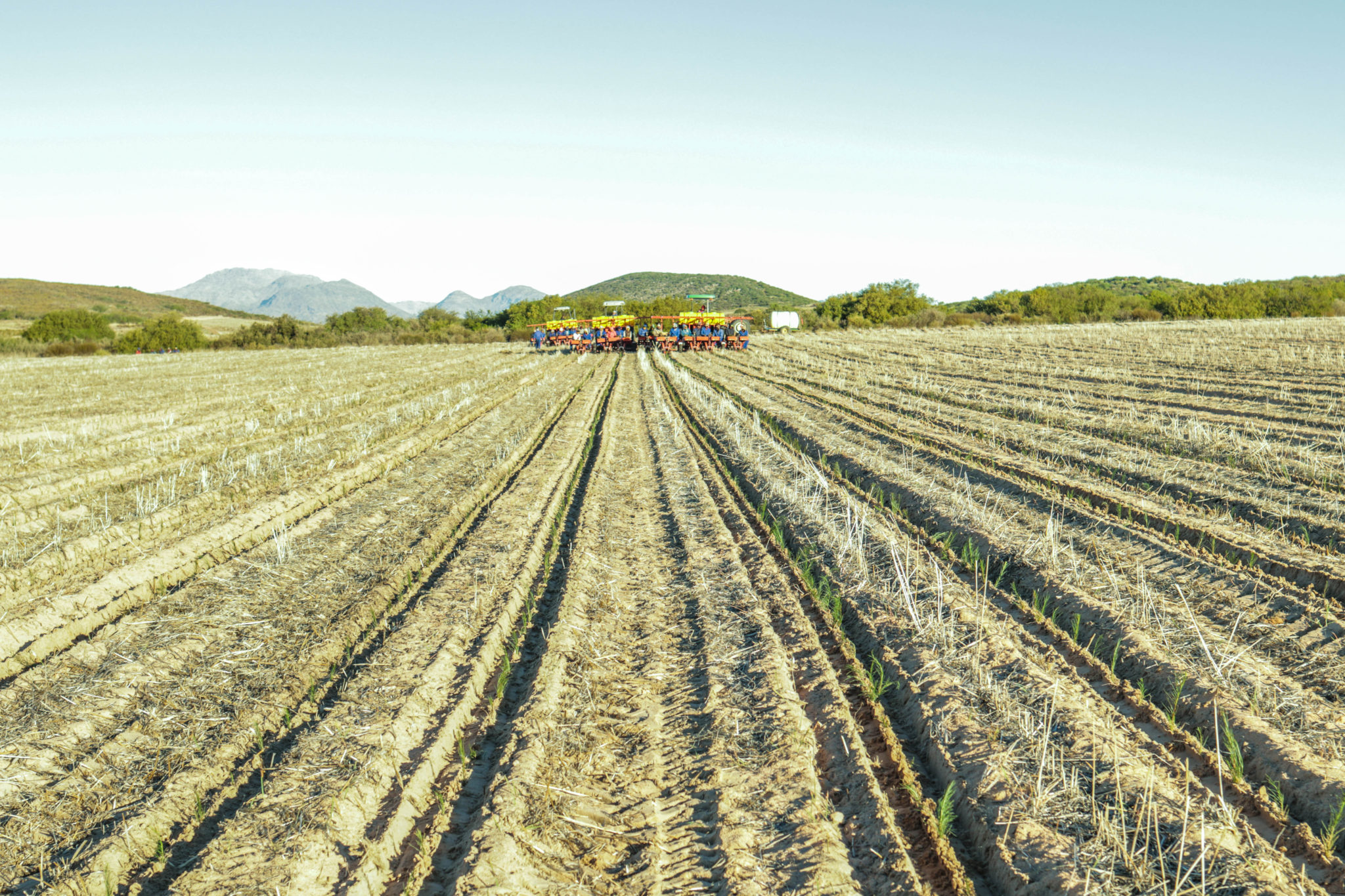 Planting starts during the last weeks of June. Good rain is essential during this period as the soil needs to be well hydrated for the planting process which starts with holes , about 10-15 cm deep, being made at regular intervals. If the soil is too dry the holes close up before the plants can be inserted! 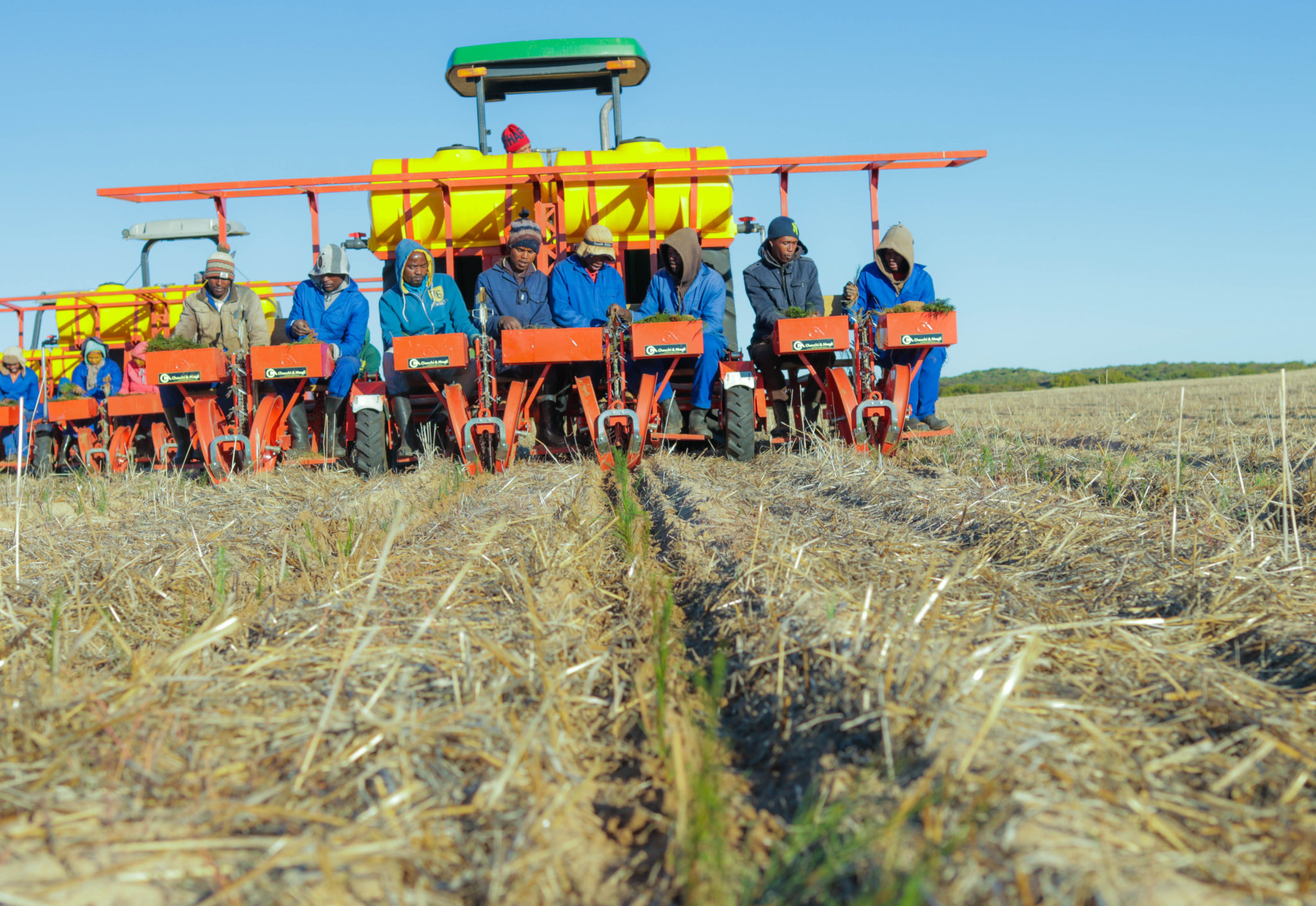 A special planting machine does 4 rows at a time and are manned with 8 people each who separate the seedlings and teams of two take turns placing them in slots which then on rotation takes them down to the ground where they are inserted in the holes. 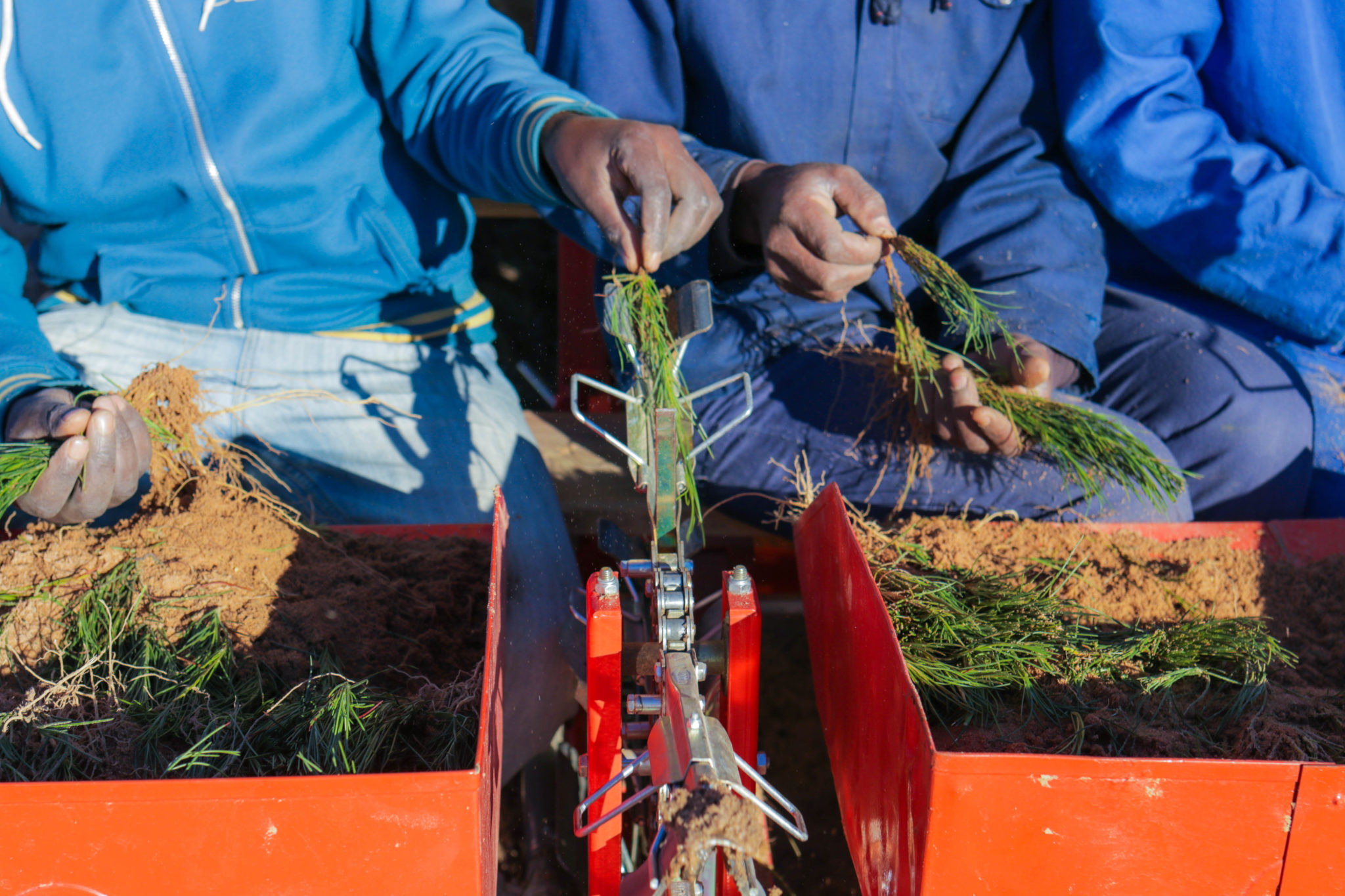 Two wheels then close up and secure the little plants in the soil. 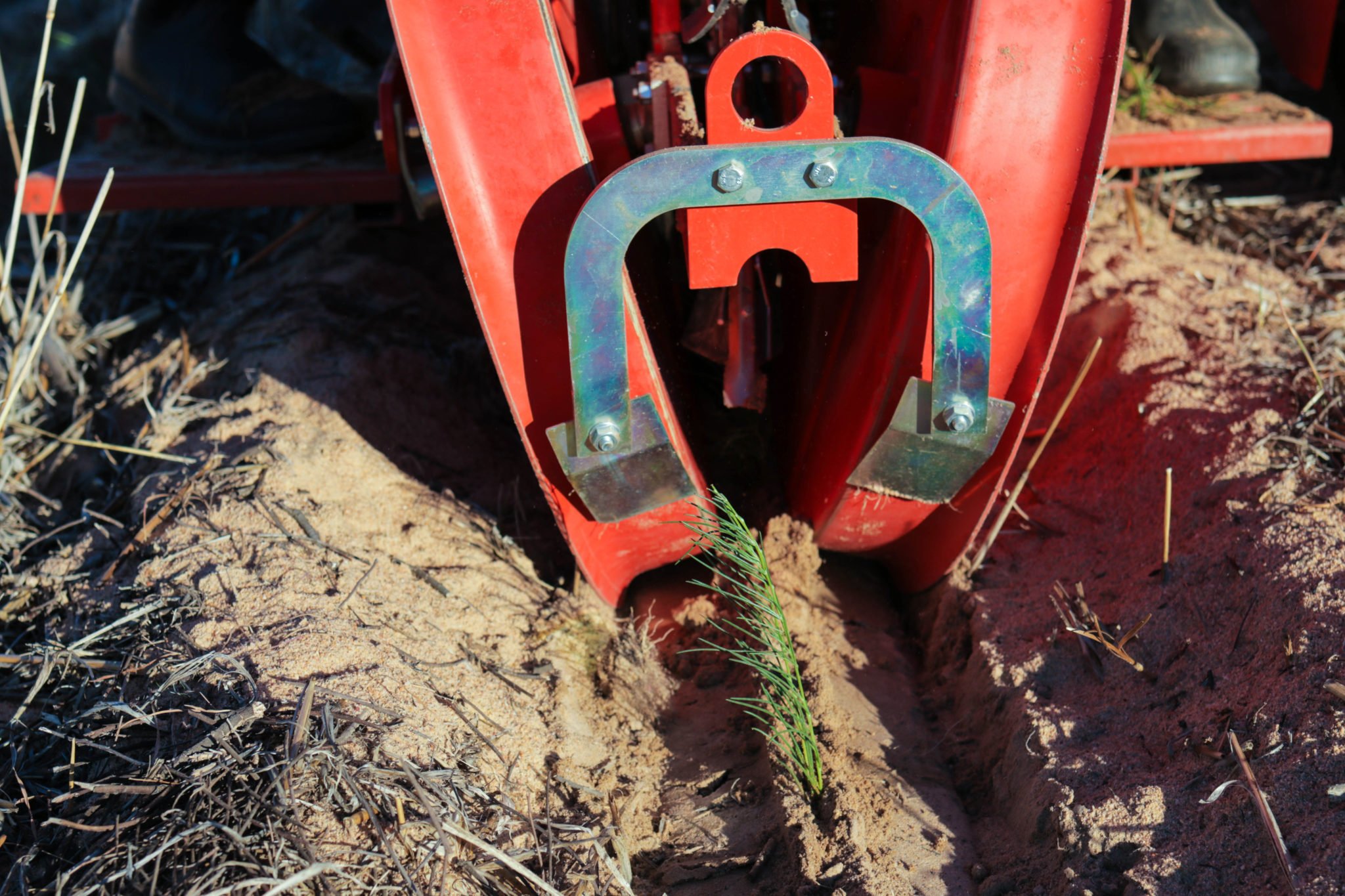 Quite mesmerizing to watch!

The little plants take about a month to settle. Although the Rooibos plant is quite hardy, planting has to be completed by end August as the seedlings are too big by September to establish successfully. Now the babysitting starts and keen eyes keep a watch on natural pests that may attack the plants.

In the first year of being planted a Rooibos field is just topped, not harvested. It is only harvested from year two and delivers peak crops for about four years wherafter it needs replacing again ….time for a younger generation to take over!

US CUSTOMERS ORDER FROM CARMIENTEA.COM

*can not be used in conjunction with other coupons and is not valid for products that are on sale.

We offer electronic newsletters to which you may voluntarily subscribe at any time. We are committed to keeping your e-mail address confidential and will not disclose your email address to any third parties except as allowed in the information use and processing section or for the purposes of utilizing a third-party provider to send such emails. We will maintain the information sent via e-mail in accordance with applicable laws and regulations.